With the Manufacturing Technology sector sitting at the heart of manufacturing, its prospects are tied closely to the fortunes of its customers who are largely concentrated in four other industries within the overall manufacturing sector – Metal Products (which includes many of the sub-contractors to other industries), Machinery, Automotive and Aerospace.

Companies in our industry are generally either selling machinery or other large capital items or tooling, accessories, software, etc., although every MTA member has a slightly different business model. Demand for machinery is mainly related to investment in the customer industries, while the main driver for most other suppliers is output although, again, there is a varying degree of overlap between the two.

At a high level, indicators such as the Purchasing Managers Index (PMI) – in our case the one for manufacturing – are a useful starting point. In the 1st half of 2018 the trend was a modest, but steady fall in the index from the peak at the end of 2017 and then, with the exception of a weak number in October, the 2nd half of the year saw this stabilise. It is important to note, however, that none of these PMI readings was below the level of 50 that marks the boundary between contraction and expansion of activity in the sector, so, despite a weakening in sentiment, activity in the UK manufacturing sector as a whole has continued to grow through 2018, albeit at a slower pace than in much of 2017.

Output data for the customers of manufacturing technology suppliers has been rather mixed through 2018 and the year seems to be ending on a weak note. For example, we have seen a fall in output for the Machinery industry during 2018, but this is from a very high peak at the start of the year and the overall level remains good by historical standards (long-term comparisons in this industry are complicated by some strange data points at the start of both 2013 and 2015).

In contrast, the Automotive industry has been on something of a plateau since early in 2016, but again, this is a historically high level. Recent data from SMMT suggests that this will fall as we go into 2019 with announcements from companies such as JLR and Ford giving some concern. However, it is worth noting that the output of engines – which are probably more important to the manufacturing technology industry than the actual vehicles – is likely to be broadly flat at a very high historical level in 2018 as exports have taken up the slack from falling production for the UK market. 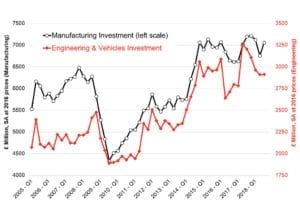 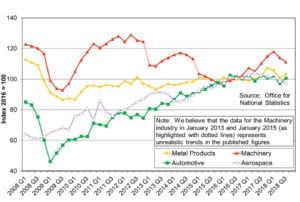 Another industry that continues to operate at a high level is Aerospace, although here the ONS data on output is slightly puzzling; it suggests a gentle fall from a peak around the middle of 2017 that does not really tie up with anecdotal evidence about the sector. Whatever the true situation, this is perhaps the most global of the customer industries and production of new aircraft and their engines seems unlikely to fall even in the medium term given the very long order backlogs at both Airbus and Boeing.

The investment picture, especially if we focus on the Engineering & Vehicles industries (which covers most of the customers for manufacturing technology suppliers) is similar in that although spending has been falling from a peak in the 2nd quarter of 2017, it still remains relatively high and is above the pre-recession levels that we saw in 2008. However, this is where the most concern about the impact of Brexit lies, mainly because for investment, this comes from the uncertainty around the process and this has probably been behind the most recent trends. For output, the main impact will come from the eventual outcome of Brexit as it is less affected until we actually leave the EU.

Evidence of the impact of Brexit related uncertainty on investment comes from the CBI Industrial Trends Survey (ITS). After a period of two years (which started after the referendum) when the investment intentions indicator for manufacturing were oscillating around a broadly neutral level, the October 2018 ITS. 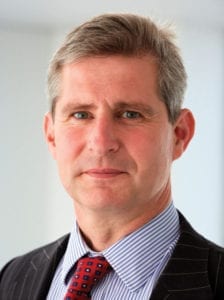 Over that time technologies have changed and adapted to meet the manufacturing needs of the nation and the world. That process is intensifying, we are currently in the fourth industrial revolution, an age of connectivity and big data and it is our duty to help the nation’s manufacturers embrace this opportunity.

In 2018 we made some real progress in leading the conversation about UK manufacturing and how important it is to the economy as a whole. We had a very successful MACH 2018 exhibition which saw 25,000 visitors descend on the NEC in Birmingham over five days and, so far, has had over £150 million worth of business attributed to it.

We also used the show as a platform to launch our report into the ‘True Impact’ of Manufacturing on the UK economy. The report showed that nearly a quarter of the economy – and more than 7.4 million jobs – depend on manufacturing. We conducted the study alongside world leading economics consultancy Oxford Economics, taking into account the full impact of the UK’s manufacturing economy, including the indirect effect of increasingly complex supply chains and the induced effect of the spending that manufacturer’s wages create in the economy.

The report clearly demonstrated that anyone who says that manufacturing doesn’t matter much to the UK’s economy is badly mistaken. We have been able to use this report to speak to government and get the message to the people making decisions that we have to invest properly, and for the long term, in the UK’s future – up to 23% of UK GDP, well over double the figure that is routinely quoted and 5 million more jobs than often thought is at stake.

It was pleasing to see that, with the expansion of the Annual Investment Allowance from £200,000 to £1,000,000, the Budget heeded this message on investment. This was a specific ‘ask’ from the MTA and we are very pleased that the Chancellor agreed with us that it was wise move to boost investment in a difficult climate. The change, which will apply to any purchase made on or after the 1st of January 2019, is a potentially huge boost for machinery and equipment suppliers as we look towards the New Year.

Our message for 2019 is one of positivity, although the uncertainty of BREXIT is casting a shadow, we now, more than ever, need to promote the fantastic opportunities available within advanced engineering. Here’s to the next 100 years of British innovation and you can be assured that the Manufacturing Technologies Association will be supporting UK manufacturers in this journey. 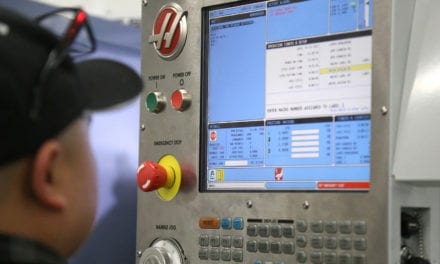 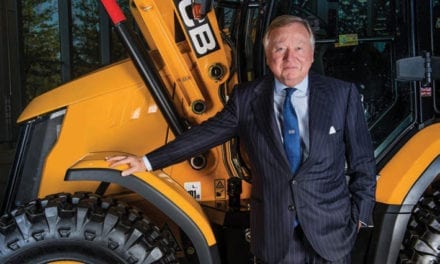 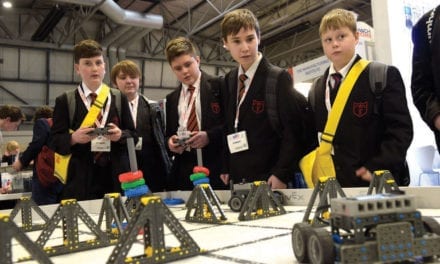 MACH INSPIRING THE NEXT GENERATION 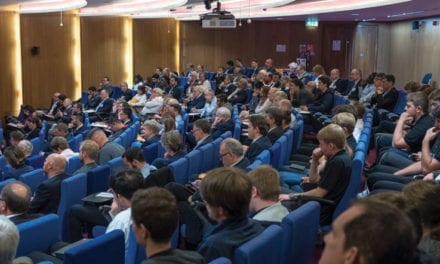