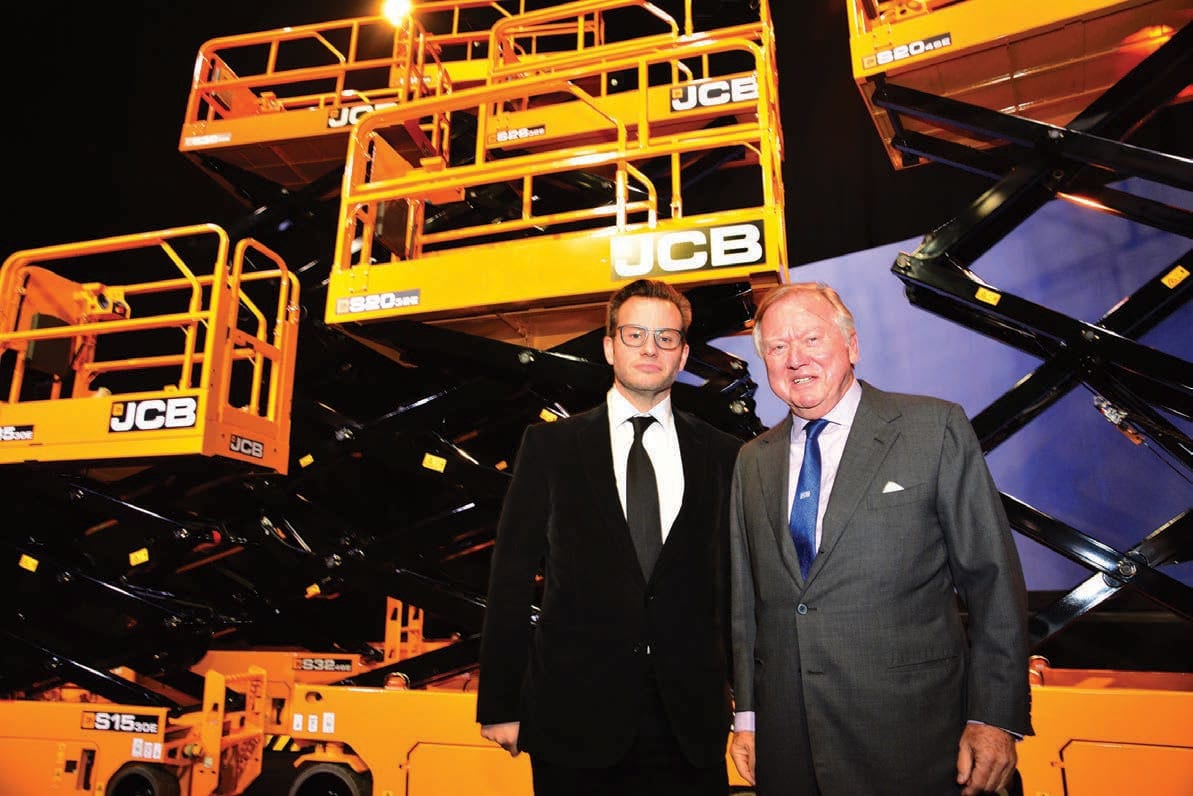 Above: JCB Chairman Lord Bamford with son George at the 2017 launch of the new JCB Access product range.

JCB: THE POWER TO MOVE

FAMILY BUSINESSES ARE THE LIFEBLOOD OF BRITISH INDUSTRY: THEY ARE TIED TO AND INVESTED IN THEIR COMMUNITIES. WE IGNORE THEIR VALUE AT OUR PERIL, SAYS JCB CHAIRMAN LORD BAMFORD.

The JCB family business story dates back to the early 1800s.

JCB Chairman Lord Bamford’s family started out as blacksmiths in Uttoxeter, Staffordshire in the 1820s. The town later became synonymous with agricultural equipment, in no small way because of the Bamfords’ farm machinery business, which was based in the town from 1845 until the late 20th century. It was here that the founder of JCB, Mr Joseph Cyril Bamford, was working until the outbreak of the Second World War. 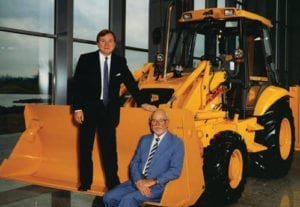 In 1945, Mr Bamford returned to Uttoxeter, rented a lock-up garage for 30 shillings (£1.50) a week and set up the JCB business. It was here that developed Europe’s first hydraulic tipping trailer for use by farmers. In 1953, he launched the backhoe loader, the classic digger that has made JCB famous all over the world. JCB – or JC Bamford Excavators Ltd, as it is officially known – the business Mr Bamford started in a simple lock-up at the end of the War, has now produced more than a million machines. One thing that hasn’t changed over the years is its pride at still being a family business. JCB continues to thrive, while many other family businesses in the UK have succumbed to takeover by bigger corporations – or worse, closed for business completely because of tax regimes over the years that made it impossible to pass family firms on.

JCB’s headquarters are still in the in the Midlands, where it employs more than 7000 people. It is now a vertically-integrated organisation; it manufactures its own engines in Derbyshire and its own gearboxes and axles in Wrexham, North Wales.

As a family business that is not focused on reporting the next set of quarterly results to the City, JCB is able to take a long-term view on growth and future investment plans. It is widely acknowledged that this characteristic paved the way for it to undertake a world land-speed record attempt in 2006 with a car powered by two of JCB’s new – and first ever – engines. This is something a PLC would almost certainly never have contemplated.

From the moment JCB secured the world record for a diesel-powered car (350.092 miles per hour with the JCB DIESELMAX streamliner car), no-one was in any doubt about the robustness and reliability of JCB’s diesel engines, which are used to power over 75% of JCB equipment today. The world record the DIESELMAX established in 2006 still stands today, testament to the focus and commitment of this unique family business on going the extra mile to get the job done to the highest possible standard. 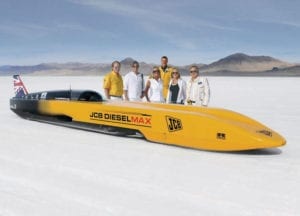 The Bamford family pictured in 2006 with the record-breaking JCB DIESELMAX streamliner car at the Bonneville Salt Flats in Utah, USA.

In 2019, JCB is opening a new £50 million factory to manufacture cabs for its earthmoving equipment. The facility will be built in Uttoxeter, near JCB’s World Headquarters in Rocester, Staffordshire, and close to where Mr J C Bamford originally founded his business in 1945.

JCB has won more than 50 major awards for engineering excellence, exports, design, marketing, management and for its care for the environment. Among them are 30 Queen’s Awards, honouring innovation and exports.