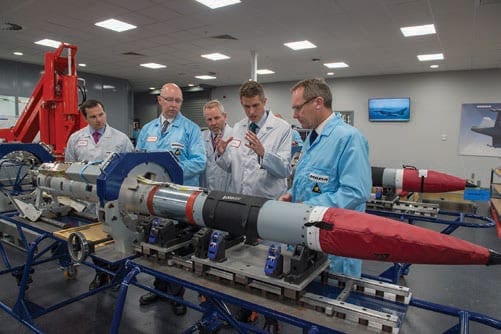 THE NORTH WEST WILL BE KICK STARTING THE NEXT INDUSTRIAL REVOLUTION, BY LEADING THE WAY WITH INDUSTRIAL DIGITISATION, ON THE BACK OF WINNING THE PILOT FROM THE MADE SMARTER REVIEW.

The North West is still one of the largest manufacturing hubs in the UK, with almost 15,000 manufacturing businesses across the region and 350,000 directly employed. It has a high concentration of Automotive and Aerospace manufacturers, with Pharmaceuticals making up almost 20% of manufacturing and Chemicals 15%. Because of these dominant sectors the North West leads the productivity table in the UK, registering 115.8% of the national average.

Outside of the dominant sectors the North West has an extremely diverse manufacturing base. Thousands of small and medium sized businesses are innovating, growing, exporting, creating jobs and just getting on with the day to day challenges faced by the sector. The North West has a hard work ethic passed down through generations of mill workers, from the spinning, weaving and cotton mills we once had covering the landscape. Firm roots were established during the first industrial revolution, which developed across Manchester and Lancashire during the 18th Century. The region was once the world leader in innovation. 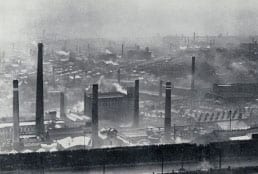 The way we were: North West Industrial scene

The big story that emerged towards the end of 2018 was the announcement that the North West had won the £20m pilot from the government-commissioned Made Smarter Review (www.madesmarter.uk). Made Smarter is an industry led review, driven by Juergen Maier, CEO of Siemens, to explore how industrial digitalisation could help improve productivity in manufacturing. It offers a huge opportunity for North West manufacturers to lead the way again, coupling innovation with hard work.

The pilot will support 3000 manufacturing businesses in the North West with advice and grants to share the tools and resources needed for the adoption of industrial digital technologies (IDT). 2019/20 will see 1 in 5 manufacturers engage with new technologies, such as robotics, 3D printing, internet of things (IoT) and artificial intelligence (AI). “Made Smarter intends to kick start a new industrial revolution for our manufacturing sector and support investment in the latest digital technologies,” Juergen Maier said. “It’s an exciting time for the North West to further boost productivity and create the high value, highly paid jobs of the future.”

Runcorn (Cheshire)-based Hosokawa Micron is at the forefront of innovation and considered a Made Smarter demonstrator when it comes to industrial digitisation. The approach with Made Smarter is to highlight current demonstrators for the manufacturing community to learn from and build more, as more businesses adopt the latest technologies. Hosokawa Micron have applied digital technologies within their particle and powder processing equipment and also throughout the manufacturing process.

“We have always focused on providing our customers with a market leading product and service,” said Iain Crosley, Managing Director at Hosokawa. “Adopting digital technologies has helped us to enhance our relationships with our customers and provide them with a better product and service. There is no question that the Made Smarter Pilot in the North West will drive better productivity and improve competitiveness, as it has for Hosokawa. If we are to lead the way in the North West, we need to work together with our supply chains and academia to be as agile as possible.”

A sector that has had its ups and downs over the past few decades has found stability in export orders. BAE Systems finalised a deal worth £5bn with Qatar for 24 Eurofighter Typhoon jets and nine Hawks in September 2018, which will have a huge impact on stability at the Warton, Preston, plant. The deal was made possible by UK Export Finance’s (UKEF) £5 billion package of support, which included providing financing and insurance.

BAE Systems Submarines, based in Barrow, announced contracts of £960m in May 2018 to ramp up the current phase of construction for the UK’s four nuclear-armed Dreadnought submarines. The site opened a £25m Academy in December 2018 to upskill employees working on Dreadnought and Astute submarine programmes for the next couple of decades. The site also received a £400m funding investment from the Defence Secretary Gavin Williamson in December 2018 to ensure the programme remains on track.

MBDA opened a new high-tech £50m manufacturing facility in Bolton during July 2018, which houses some 670 highly-skilled design, engineering and manufacturing employees and is being used to produce inert missile equipment and systems. The new site is where several key missiles are being produced for the UK Armed Forces, including; Brimstone, ASRAAM, CAMM (Sea Ceptor and Land Ceptor), SPEAR, and Meteor which has its final assembly for all six European partner nations carried out in Bolton.

Airbus, one of the UK’s largest manufacturers, employing 14,000 people at 25 sites, including 6,000 at Broughton in North Wales, has held back on its future plans with the UK because of Brexit.

“It’s not as easy as Jacob Rees-Mogg thinks, we don’t just export cheese or cider to another country,” Katherine Bennett, boss of Airbus UK said. “We have parts that go back and forth to different countries to be worked on – sometimes several times. That is why frictionless borders are important.”

Airbus UK also supports more than 100,000 jobs in the wider supply chain and spent £5bn with more than 4,000 UK suppliers last year. The Broughton plant, which has an extensive supply chain from the North West, builds the wings for all Airbus planes and is seen as being most vulnerable to a so-called “hard Brexit” because components could be held up at the border.

Graphene was developed in 2004 by two researchers at The University of Manchester: Prof Andre Geim and Prof Kostya Novoselov. They were awarded the Nobel Prize in Physics for their pioneering work. Graphene is the strongest known material and can conduct electricity and heat incredibly well. It can be used in a wide range of applications, from aerospace engineering to digital electronics and biomedicine, but to date the UK seem to have been a slow adopter of this innovative material.

Hopefully, we will see more businesses investing in Graphene during 2019, as the Duke of York officially opened the University of Manchester’s £60m Graphene Engineering & Innovation Centre in December 2018. A world class facility and hub of graphene experts from academia, working with industry on the research and commercialisation of graphene.

After unveiling the new building, the Duke of York said: “This is going to be a huge industrial transformation which could benefit both humankind and industry and it starts here. I wish you all every success.”

The University of Central Lancashire (UCLan) has led an exciting development with Graphene during 2018 with Juno, the world’s first graphene-skinned aircraft. The University’s aerospace engineering team has worked in partnership with the Sheffield Advanced Manufacturing Research Centre (AMRC), the University of Manchester’s National Graphene Institute (NGI), Haydale Graphene Industries (Haydale) and a range of other businesses to develop the unmanned aerial vehicle (UAV), which also includes graphene batteries and 3D printed parts.

This is a great example of collaboration between academia and industry; hopefully, the first of many graphene developments now we have the GEIC as a central hub in Manchester. The North West have been waiting for graphene to find its place in the market and the collaboration has demonstrated yet another possibility with the innovative material.

The Hub for Lightweight Structures

Investment opportunities for lightweight materials are worth a potential £32.2 billion over the next four years, with the global market – led by the transport sector – projected to expand to £138 billion by 2021. The North West has been highlighted by government as the hub for commercialising new developments, with opportunities in aerospace (worth £18.6 billion by 2022), automotive (worth £13.1 billion by 2022) and rail (worth £591 million by 2021).

The North West supply chain is already working with a range of materials, such as, light alloys, graphene, 2D materials and technical textiles, which puts the region in a great position with a global market that is growing exponentially. This is further supported by the region being home to 300 automotive supply chain firms, being Europe’s largest aerospace cluster, access to over 100,000 people working in high productivity manufacturing and a talent pool of 14,000 students studying advanced material disciplines.

BAC Mono, launched in 2011, has continued to lead the way during 2018 with its innovative development of the world’s only road-legal, single-seat supercar, and it now plans to become the first car manufacturer in the world to go ‘climate positive’. This means that the Liverpool-based manufacturer will contribute to the actual removal of more carbon dioxide from the atmosphere than it emits. It was the first company in the world to develop hybrid carbon-composite wheels and the first manufacturer to develop a car featuring panels incorporating graphene.

Ian Briggs, BAC Co-Founder and Design Director, said: “We are focused on continuously reducing our carbon footprint and will continue to work with our UK-based supply chain. We have always stayed loyal to local suppliers whenever possible and source 98% of parts from the UK, with almost 50% from the North West. We will work towards producing climate-positive products and continue to lead the way in the automotive world.”

The two dominant brands – JaguarLandRover and Vauxhall – both made redundancies towards the end of 2018, 200 and 240 respectively, but for separate reasons.

JLR had recruited extra temporary workers to prepare for the launch of the new generation Evoke and laid them off, as planned. JLR is in a healthy position and maintaining market share with the stylish SUV, the Evoke, as global demand increases for this style of vehicle. Vauxhall has been experiencing difficulties and has not turned a profit for a couple of decades. Sales of the Astra have been reducing and the redundancies are needed for the business to remain competitive. Unfortunately, this is one of the consequences of improving productivity, while losing sales.

The food sector’s Brexit risk is focused on labour: almost a third of the workforce being from the EU. Employing around 50,000 people in the North West food manufacturing plays an important role in local employment and exports.
On the positive side, 200 jobs are being created at Cavaghan and Gray (owned by the 2 Sisters food group), based in Carlisle, after it won a five-year contract to supply a new range of ready meals to Marks & Spencer.

William Duncanson, the factory’s site director, said: “This is a huge commitment. We are investing £7m on a five-year agreement with Marks and Spencer. We still have a very strong core base business with Marks and Spencer going back 50 years, for whom we produced some of their very first prepared meal dishes.” Kraft Heinz invested £20m in its Wigan factory, as part of the parent company’s plans to increase output. The size of the workforce at the plant has reduced over recent years, from thousands down to 850, but Heinz arise still investing in modernising the operation. Its production line can now fill 1200 cans of beans and soups a minute.

Mozzarella cheese manufacturer Glanbia Cheese, based in Northwich, has posted a huge rise in sales and is projected to double in size over a three year period. It has invested £5.46m in new capital projects, including installing “business-sustaining” equipment at both of its plants, to help maintain an efficient supply to its European customer base. 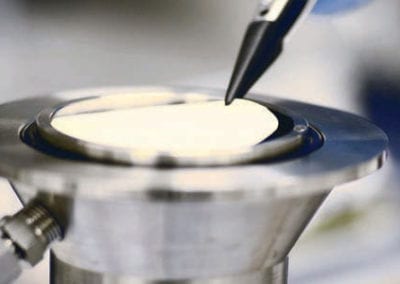 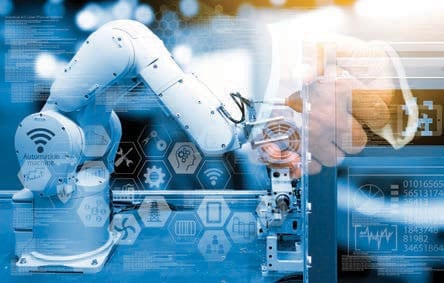 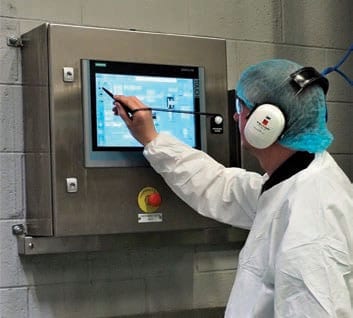 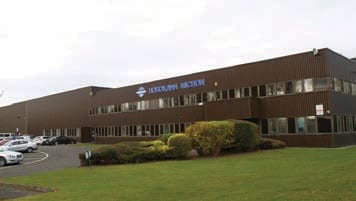 BUILDING A SUPPORT COMMUNITY IN THE NORTH WEST

Gary Sheader, founder and chairman of The Manufacturers Alliance, says: “The Manufacturers Alliance was established in 2013 as a peer group for ambitious manufacturing leaders. Our groups meet on a monthly basis to share ideas and support each other in working through the challenges that arise from growing a business. Our goal is to support the growth of SME manufacturing businesses via an affordable membership model that connects likeminded people in the industry.

We firmly believe that manufacturing is the backbone of the UK economy and every effort should be made to accelerate the growth of those with ambition. We currently have six groups in the North West area and plan to launch three more groups in 2019.” 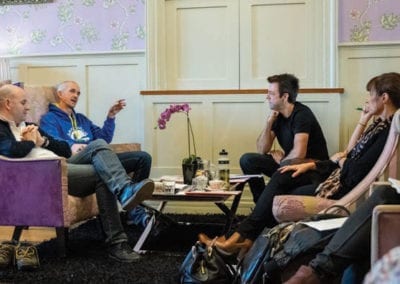 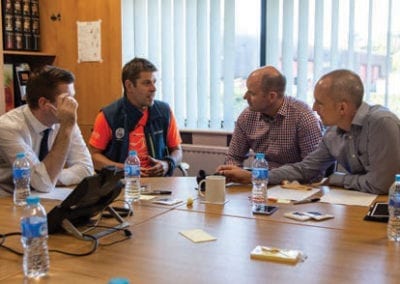 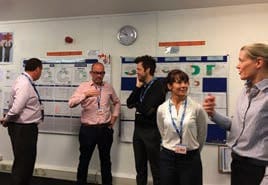 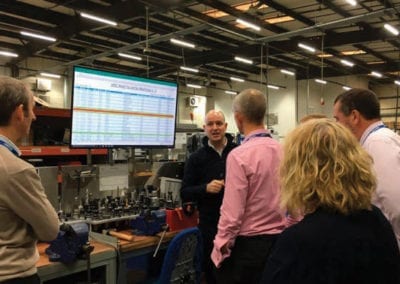 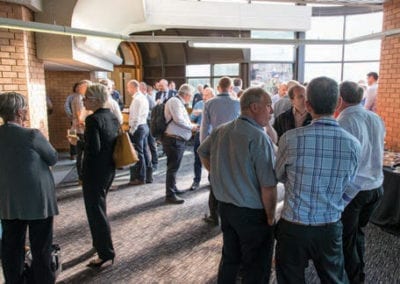 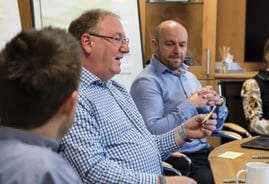 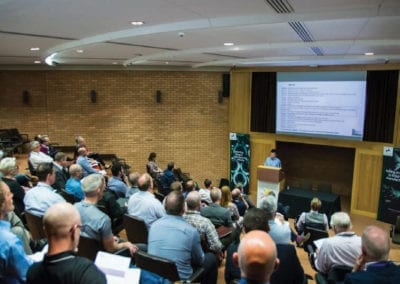