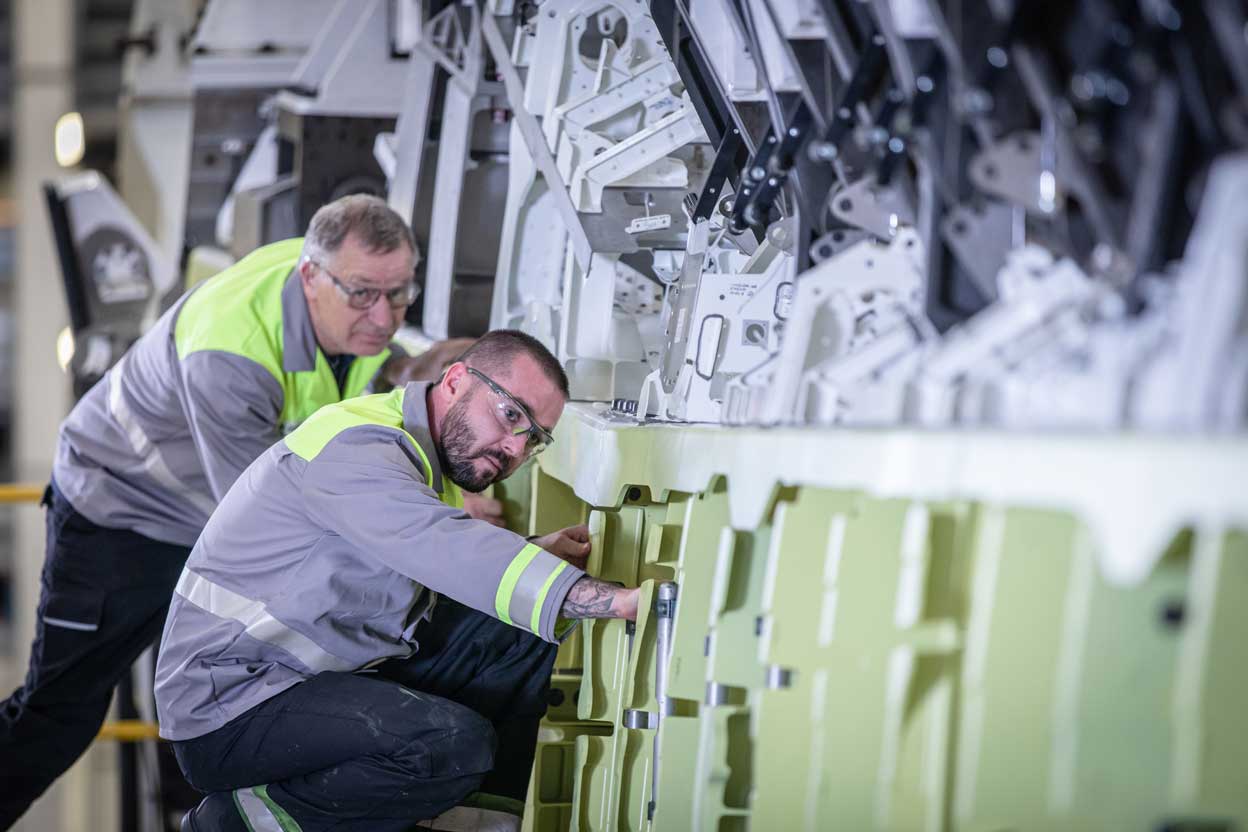 Almost four years since the UK voted to leave the EU, Brexit still dominates the landscape for Northern Ireland’s manufacturers. 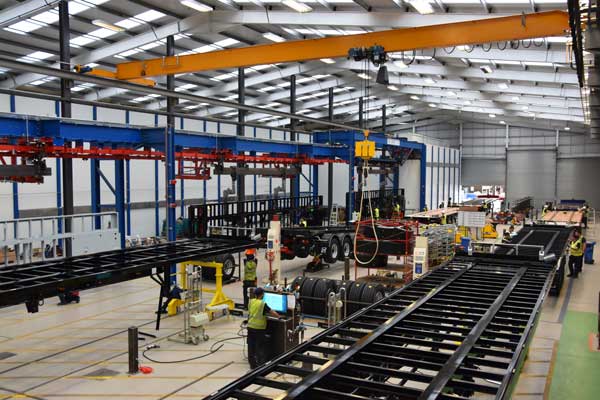 SDC Trailers – a producer of lorry trailers that employs 650 people in the region – said that it planned to cut jobs, though no details on numbers have yet been released.

Manufacturing is a key part of Northern Ireland’s economy, with more than 88,000 employees across 5,800 businesses, according to Invest NI, the regional business development agency. The sector has grown almost three times faster in Northern Ireland in recent years than in the UK as a whole, accounting for more than 11% of employment and over 15% of gross value added (GVA).

However, Brexit has hung over the sector since the June 2016 referendum. Northern Ireland’s position is uniquely sensitive due to its land border with the Republic of Ireland, an EU member state. This has placed the region at the heart of tortuous negotiations between the EU and UK over the latter’s withdrawal agreement (WA), with sometimes conflicting priorities at play: the desire to maintain an open border on the island of Ireland, even while Northern Ireland leaves the EU with the rest of the UK.

At the time of writing in late November, the UK was in the midst of a general election campaign, which could lead to a new set of negotiations, depending on the outcome. However, should the WA – or something similar – become reality, it has a number of implications for Northern Irish manufacturers. Many of these are positive, according to Stephen Kelly, chief executive of trade body Manufacturing NI. Most importantly, it would take the threat of ‘no deal’ off the table.

Additionally, the deal would make Northern Ireland effectively part of the EU customs union and single market for at least four years, while being de jure part of the UK customs territory, a scenario that could provide manufacturers with unique opportunities, Kelly said. 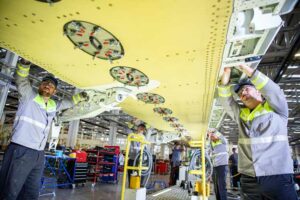 Bombardier is the most important hub in Northern Ireland’s aerospace sector. Employees work on composite aircraft wings for the A220 family in Belfast.

However, there are concerns that such a deal could hinder companies’ position within the UK market, with new costs and complexities around tariffs and paperwork when ‘exporting’ from Northern Ireland to Britain. Northern Irish sales to Britain are worth one and a half times the value of all its exports, and almost four times the value of exports to the Republic of Ireland. Should the WA go ahead, “there’s a lot of compensation and legislation required to protect us”, Kelly said.

For some manufacturers, concerns over Brexit have already had an impact. In early November, SDC Trailers – a producer of lorry trailers that employs 650 people in the region – said that it planned to cut jobs, though no details on numbers have yet been released. In a statement at the time, the company said “the uncertainty of Brexit and other economic concerns has resulted in a slowing down of capital purchases from retailers, logistics firms and others”. Beyond Brexit, the past year was dominated by changes in ownership at three major Northern Irish manufacturers, all of which seem to present more stable and positive futures for the companies. For example, Energy firm Infrastrata agreed a deal to acquire Harland and Wolff, the shipbuilder whose giant cranes dominate Belfast’s skyline.

The transactions did not stop there. Bombardier – the most important hub in the region’s crucial aerospace segment, manufacturing composite wings for the Airbus A220 aircraft family, among other projects – announced in May that it was putting its Belfast facilities up for sale. That process came to a swift end in October, when a deal was announced with Spirit AeroSystems.

Carol Phillips, vice-president of human resources in Bombardier’s Northern Ireland operations, said the transaction is expected to close in the first half of 2020, subject to regulatory approvals and other customary closing conditions.

“Bombardier Belfast brings world-class engineering expertise to Spirit and adds to a strong track record of innovation, especially in advanced composites,” she added.

A fall in market demand for diesel buses forced WrightBus into administration in September. The manufacturer of London’s New Routemaster double-decker buses was subsequently acquired by Jo Bamford, a member of the family behind JCB. In a statement at the time, he said that while there was “a very big job to do to turn it around”, the company sees opportunities for the future as the market looks to decarbonise, an area in which Wrightbus had already made some headway. 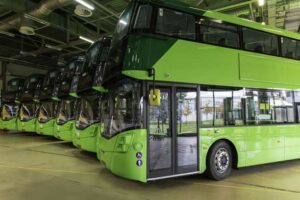 Jo Bamford acquired WrightBus in October. Above, some of the first buses to be delivered under the new ownership, part of an order from First Group for use in Leeds, England.

“This is our central vision for Wrightbus – to be market leaders in the zero emissions buses of the future.”

Poultry producer Moy Park is Northern Ireland’s largest private sector business. Andrew Nethercott, retail director of the company’s Prepared Foods business unit, said the company had invested £45 million in its Northern Irish facilities in 2019. The region’s strong agricultural heritage and its close transport link with Great Britain make it an ideal base for the company, he said, though he noted that decision-making locally had been impacted by the absence of a local political administration, with Stormont suspended since early 2017.

“Moy Park has spent a lot of time focusing on the things it can control, such as building and enhancing relationships with retailers as well as investing in talent development and career advancement,” Nethercott added.

US manufacturers have established a number of operations in the region. Terex, a producer of lifting and material processing products and services in construction, quarrying, mining and other industries, opened a new facility in Campsie in Derry/Londonderry in September, part of a £12 million investment. This is part of the company’s goal of targeting growth in waste management, recycling and mobile conveying sectors, according to Kieran Hegarty, president of Terex Materials Processing. He said the facility will manufacture product lines for Terex Ecotec (waste management and recycling) and Terex Conveying Systems, its mobile conveying business. The company also operates facilities in a number of other parts of Northern Ireland. 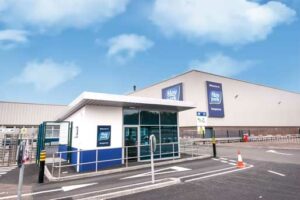 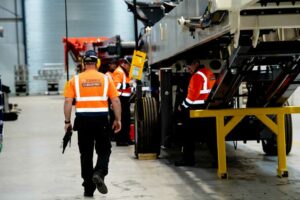 US-owned company Terex is targeting growth in waste management, recycling and mobile conveying with a new facility in Campsie, in the West of Northern Ireland.

The continuing lack of a regional political administration is a challenge, said Hegarty, along with uncertainty around Brexit. “As an exporting manufacturer, as well as being an importer of materials needed to make our products, the freer the trade environment the better,” he said. “We are following the situation closely and while we will need to adjust to new policies that might come in place for Brexit, we will continue to focus on our long-term business plans, new product development and executing our manufacturing strategy.”