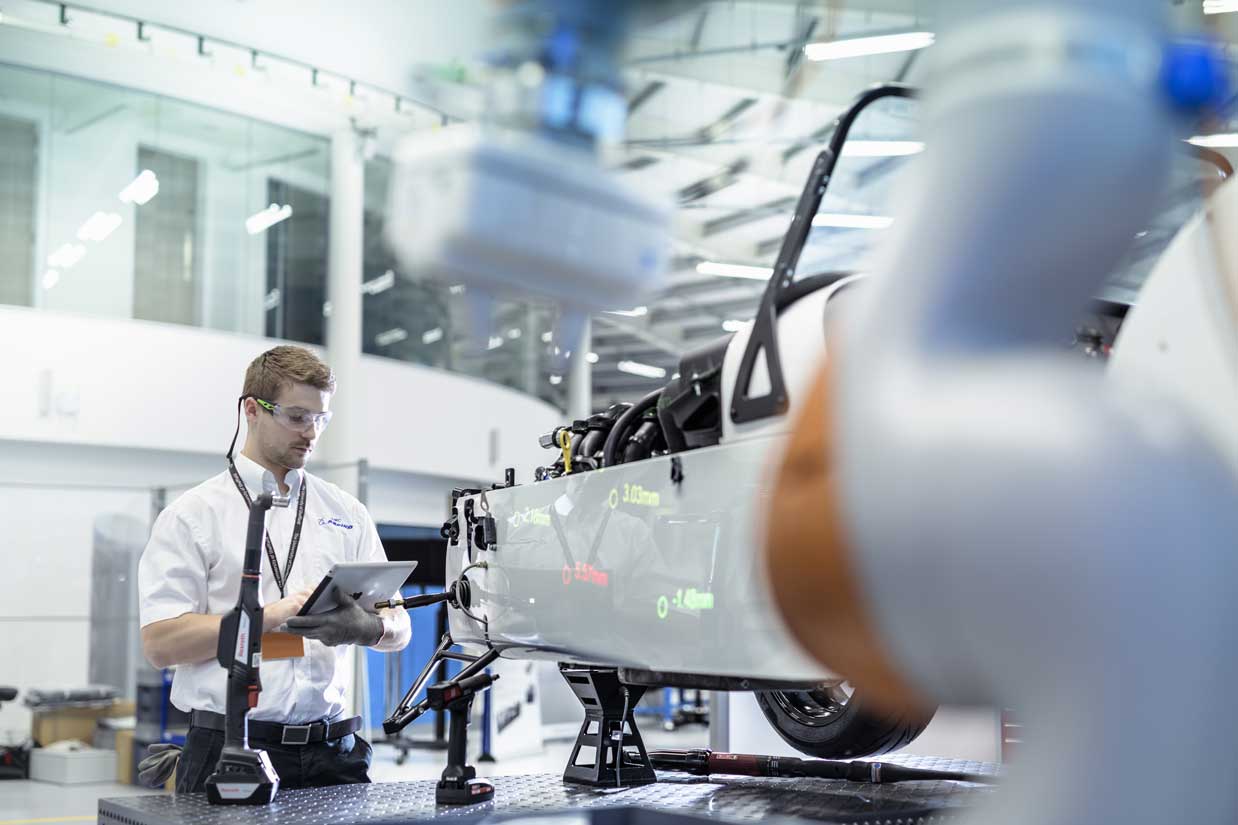 A WHITE ROSE WITH THORNS

Manufacturing’s 2019 in Yorkshire and Humberside has been headline-grabbing, sometimes with good news; othertimes, less so.
BY DAVID WALSH

YORKSHIRE IS TOO BIG TO BE KNOWN FOR ONE MANUFACTURING SECTOR, WITHIN ITS HUGE BORDERS IT DOES THEM ALL. 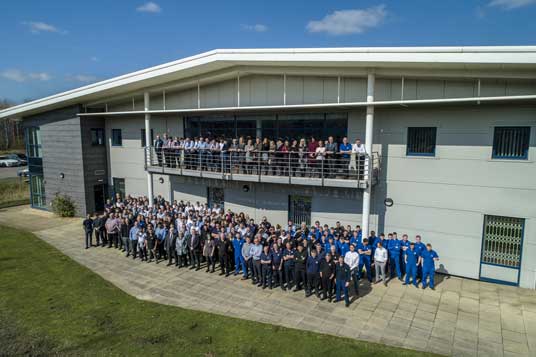 Staff celebrate the 40th anniversary of AESSEAL, which is now one of the world’s largest seal manufacturers.

From glass in Barnsley and Rotherham to Coca Cola in Wakefield, to Burberry trench coats in Keighley and chemicals, caravans and turbine blades in Hull.

Every city, town and district has world class companies. AESSEAL in Rotherham is one.

In four decades it has grown from a tiny distributor into one of the world’s biggest seal manufacturers. And it shows no sign of stopping.

The firm has unveiled plans for a £20m extension of its global headquarters and 200 jobs, building on year-on-year record sales, set to soar past £181m in 2019.

The company employs more than 1,800 and has 230 sites in 104 countries. Founder Chris Rea once confessed he made enough money to retire at 35. Now in his sixties, his drive for success is undimmed.

World famous trench coat company Burberry has plans to invest further in its manufacturing operations in its Yorkshire factories in Castleford and Keighley.

The group’s chief financial officer Julie Brown says they remain committed to the county. The company also has a growing office – a shared services centre – employing 400 in Leeds.

In Wakefield, Coca Cola celebrated the 30th anniversary of its factory saying it had invested £49m into operations, including a £24m canning line.

Employing 450, it is the largest soft drinks plant by volume in Europe, making 100 cans a second.

And in Batley, Angloco secured a £30m contract to replace and service most of the Ministry of Defence’s existing fire engines.

The firm, the UK’s oldest manufacturer of fire engines, will not only supply more than 80 new vehicles but will support them in the UK and around the world for the next 12 years.

Looking to the future

The Shipley firm has continued to invest by taking action against risk, including having more contracts paid in sterling, buying more stock and finishing products early to allow for transport holds ups.

Financial director Mandy Ridyard is also a big believer in engaging with organisations that can help, such as Leeds City Region LEP, Leeds University (it’s had a PhD student on a KTP for two years) the 3M Buckley Innovation Centre (around 3D printing in metal), the AMRC, the Catapults and the DIT.

She said: “When times are uncertain, use all the things that are available to you. Engage with help, it can be a labyrinth but there’s a lot of it.”

Export is 70 per cent of the £8.5m-ayear business, to places like North America, the Philippines and Morocco. Produmax also supplies Boeing in Sheffield and Portland.

The 82-strong workforce is 20 per cent apprentices – making the average age 35 – and 15 per cent women. It also has four graduates and “pretty much everyone is going through some sort of training.”

It also engages with primary and secondary schools and has run innovative work experience days for teachers. Manufacturers are targeting growth and investing accordingly, according to Craig Gray, director of commercial banking at NatWest in Sheffield.

Low interest rates and the current annual investment allowance tax regime mean it is a good time to invest as manufacturers increasingly focus on automation and productivity. 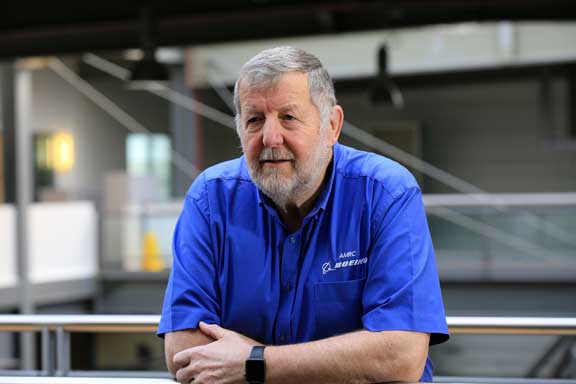 Keith Ridgway has retired as Executive Dean of the AMRC

The world of advanced manufacturing was rocked in 2019 by the shock departure of Keith Ridgway from the AMRC (Advanced Manufacturing Research Centre).

Over 20 years he helped create a world-famous research centre that employs 700, has more than 100 paying partners and has attracted more than 100 companies to the area including Boeing, McLaren and Rolls-Royce.

Although part of the engineering department at the University of Sheffield, Prof Ridgway operated at arm’s length and with entrepreneurial flair.

But a push for more oversight by university chiefs, and a new vice chancellor, led to a clash of cultures and the retirements of not just Prof Ridgway, but a string of key people including his wife Christine, co-founder Adrian Allen, longstanding executive director John Baragwanth and well connected fixer, former business minister Richard Caborn.

The AMRC pioneered paid work by academics for manufacturers and led to a Nuclear AMRC, an apprentice training centre and satellites in Derby, Wales, Preston, the Wirral and South Korea. It also powered the engineering department to top spot for research income this year, earning £124m (57% from the AMRC) and overtaking Imperial and Cambridge.

The university says the AMRC is now led by an experienced board that has been mentored by Keith, Adrian and John. 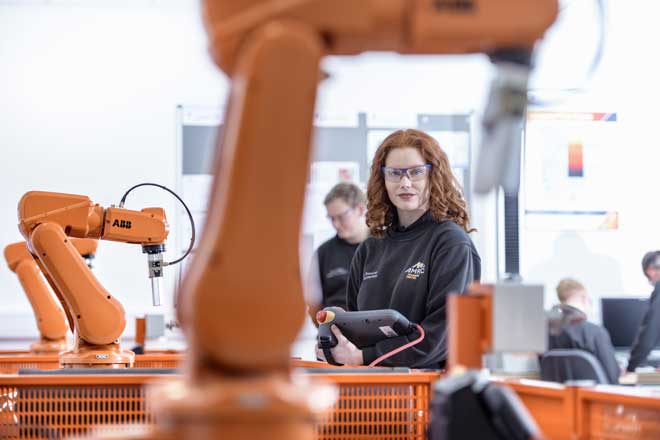 Researchers at Factory 2050, part of the AMRC

Chris Jewitt, chairman of Footprint Tools in Sheffield and AMRC partner, said Prof Ridgway’s legacy is not just the cluster of hi-tech buildings on the Rotherham-Sheffield border, but the people too. He said: “The AMRC, together with its highly qualified and committed researchers, forged in the Ridgway ethos, are two of our most valuable and treasured assets.” 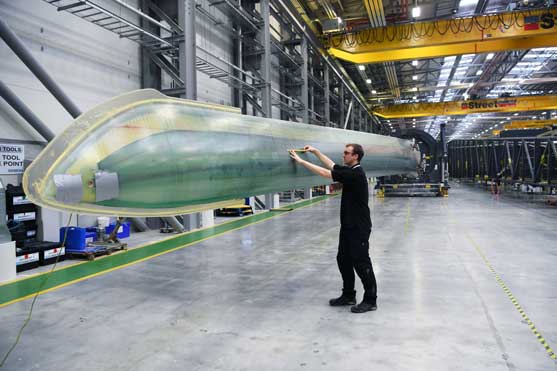 HULL IS A MANUFACTURING POWERHOUSE

The sector is the joint largest employer in the city, along with health, employing 18,000, while more than 54,000 work in the wider engineering and manufacturing sectors, with a GVA of £3.7bn.

The biggest include FTSE fresh food giant Cranswick, medical devices company Smith & Nephew and conveyor belt business Fenner, which employs 4,300 and was acquired by Michelin in 2018.

Hull’s proud caravan manufacturing traditions are alive and well – and a surge in UK staycations has provided a boost.

Chemicals company Croda has made a £27 million capital investment into the production of a new polymer, while Tricoya Technologies’ £50 million wood chip production facility – set to start operations at Saltend Chemicals Park in 2020 – has a targeted annual production of 30,000 metric tonnes.

And it’s full steam ahead for Siemens’ new £200m rail factory in Goole, set to open in 2023 and be fully operational two years later when it will employ up to 700.

RB – formally known as Reckitt Benckiser – has opened a £105m Science and Innovation (S&I) Centre in Hull. It is the first investment of a £200m programme in the city. The company is committing a further £95m to upgrade its manufacturing facilities in Hull, which currently employ 1400. 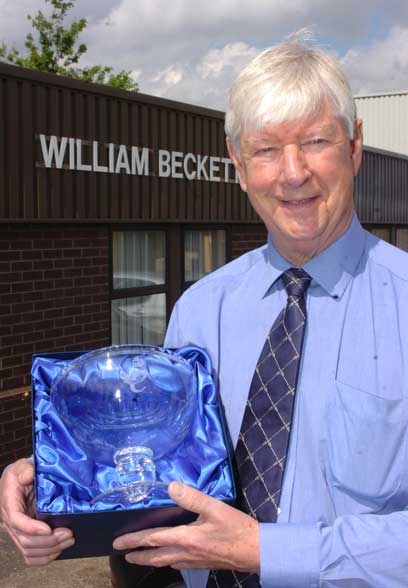 William Beckett with Queens Award in 2012.

GET UP OFF THE FLOOR

Brexit is supposed to herald a ‘global Britain’ in which trade with the rest of the world more than makes up for the loss of tariff-free business with the EU.

But William Beckett, chair of the International Trade Forum in Sheffield, attended the ‘Metalex’ trade show in Thailand in November and was dismayed by the dismal UK showing.

He estimates there were 500 Germans on more than 50 stands in all eight halls, while the Brits had 20 people from six companies in “pokey little booths.”

Mr Beckett said: “We have a terrible reputation for not getting off our butts.”

He believes the majority of exporting manufacturers have turnover of more than £10m and there are “desperately few small firms.”

He said: “It’s pretty pathetic, enormous numbers are relying on ecommerce. But introductions at an exhibition and face-to-face selling are still vitally important.”

Mr Beckett does not fear Brexit because WTO tariffs on most manufactured goods are in the low single figures.

The UK needs a trade deal, but “nobody in Europe is going to pull the plug. Trade barriers aren’t as bad as people think.”

In 2001, Sheffield had 17 trade associations but they have all died out.

The ITF, a relatively new organisation, tries to replicate them. It has 300 member companies and has led trips to Dubai, the Czech Republic, Poland and Thailand. It is going to Ghana and North America next year.

Mr Beckett believes DIT should switch focus. Its Tradeshow Access Programme only pays up to £2,500. “It should change its remit. The big firms can look after themselves. It’s the SMEs that need support.”

With a climate emergency being declared almost everywhere in 2019, everything is set to change, including energy.

Yorkshire is home to a host of futuristic projects including the holy grail of limitless green power – nuclear fusion.

The UK Atomic Energy Authority is building a £22m fusion research centre in Rotherham to take advantage of the region’s advanced manufacturing skills. 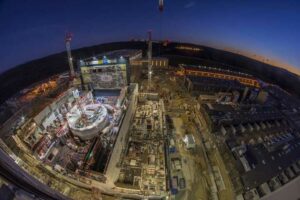 The UK Atomic Energy Authority is supporting a drive to help UK companies win contracts on the International Thermonuclear Experimental Reactor under construction in France. 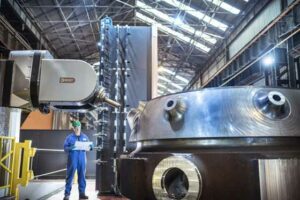 The aim is to develop ‘joining technologies’, such as welding novel metals and ceramics, to help UK firms win contracts on the multi-billion euro International Thermonuclear Experimental Reactor in France, which is set to be switched on in six years.

Prof Ian Chapman, chief executive of UKAEA, said: “It’s had this huge potential for so long, now we are on the point of delivery. It will be a paradigm shift in energy production.”

Sheffield Forgemasters has its own plans in the energy sector: small, modular nuclear reactors. The company is spending £10.5m on manufacturing techniques in civil nuclear, including electron beam welding, its biggest ever research project. New boss David Bond believes SMRs could hit a ‘sweet-spot’ at a firm which already has expertise in making reactors for nuclear subs. Another Sheffield company is soaring on hydrogen.

ITM Power is moving all operations to a new factory in Tinsley, Sheffield, where it says it will have the largest electrolyser manufacturing capacity in the world, 1GW per annum, enough hydrogen to power 700,000 homes.

In East Yorkshire, work officially started this summer on the world’s largest offshore wind farm. Hornsea One will be able to power well over one million UK homes with clean electricity.