The perception of manufacturing is changing. For many years, the word was almost considered dirty – an antiquated industry of hard slog at the forge, pollution, and undesirable conditions. Of course, the modern reality is very different – and, as the fourth industrial revolution continues to evolve, it’s a view that is quickly being dispelled. Manufacturing is an exciting place to be – where some of the world’s top minds work on many of the most interesting challenges we face in high-tech facilities. The industry is at the forefront of many plans: the UK and Scottish Governments are working with the academic and business communities to create a vibrant manufacturing sector that has a positive impact across the economy.
[content_boxes layout=”icon-with-title” iconcolor=”” circlecolor=”” circlebordercolor=”” backgroundcolor=””] [content_box title=”Hot Topics” icon=”” image=”” image_width=”35″ image_height=”35″ link=”” linktarget=”_self” linktext=”” animation_type=”0″ animation_direction=”down” animation_speed=”0.1″]

The last 12 months have seen that shared ambition take significant strides forward. At the tail end of 2016, the Scottish Government shared its intention to develop the business case for establishing a National Manufacturing Institute for Scotland (NMIS), a joint centre of excellence and skills academy – a fulcrum for the industry north of the border.

In 2017, the First Minister announced the creation of the Lightweight Manufacturing Centre (LMC). Based in Renfrewshire and run by the AFRC, the £8.9-million facility will be the first step towards the NMIS. In the coming years, the LMC will play a hugely important role for a range of sectors, from oil and gas through to automotive and aerospace. It will provide additional manufacturing research space for new equipment and new capabilities helping Scottish businesses to face modern manufacturing challenges related to lightweight materials. It will help place Scotland at the forefront of lightweight manufacturing.

Collectively, Scotland’s businesses spend over £870 million a year on research and development, manufacturing dominates this expenditure accounting for around 60% – that’s £514 million a year being invested in the future of manufacturing in Scotland by businesses themselves. This research and development work drives innovation which in turn brings about economic growth; new centres such as the LMC have the ability to increase that figure and further stimulate the economy.

We heard great news earlier this year with regards to a Scotland based company winning a significant aero contract and the Government’s plans to increase R&D support from its enterprise agencies by £45 million. This combined with the efforts of the private sector shows that there is a great future ahead for manufacturing in Scotland.

In the past year the AFRC has continued to play a central role in Scotland’s manufacturing R&D sector, working closely with Scottish Enterprise, Scottish Funding Council, Highlands and Islands Enterprise, and the private sector to drive it forward. In the past year, we’ve grown to a team of more than 130 and remain the only High Value Manufacturing Catapult centre based in Scotland.

As well as our commitment to the LMC, in our core areas of forging and forming, we have committed to our FutureForge project, supported by funding from the Aerospace Technology Institute and Scottish Enterprise. Work will begin early in 2018 on its development, shining a digital light on what has for years been considered somewhat of a black art.

We also acquired a new vertical flow former, allowing us to work on smaller-scale automotive parts, and our radial forge, which is the only machine of its kind in the UK available for commercial R&D work. We have already begun work on reducing the weight of automotive transmissions, while also strengthening the materials.

On the digital front, we’re immersing ourselves in virtual and augmented reality (VR / AR) technologies. Working with a consortium of Scottish businesses and other research partners we’re overlaying AR information on physical assets to get a better understanding of how buildings can be laid out for the construction industry. And, in manufacturing, we’ve created digital twins of factories to find new ways of setting them up more efficiently, without any disruption in the real world.

These are just some of the ways the future of manufacturing is currently being defined. With access to these technologies, and the host of others still in development, Scotland can play as important a role in the fourth industrial revolution as it did the first. FutureForge, the LMC, and the NMIS are milestones in the country’s journey towards making that ambition a reality.

If 2017 was the year perceptions of manufacturing began to change, then 2018 will be the year it has a whole new identity.

Prosperity Partnerships: What Are They? 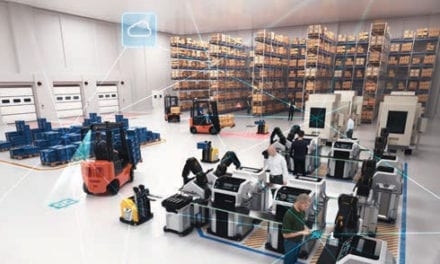 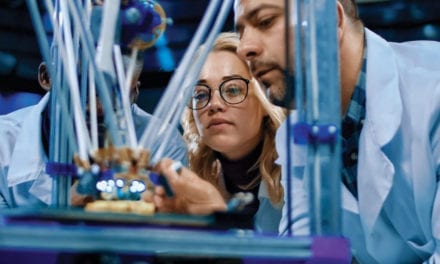